A Brief Guidebook for using SPSS at Empire State College

T-tests compare sample means of 2 groups and determine if they differ significantly.  There are 3 different types of t-tests:

Independent-samples t-test:      This test compares means of 2 independent sample groups. For example, we could compare the number of hours that men watch television to the amount of time that women watch television.  Remember, since we are comparing means, the dependent variables must be a continuous variable.  Grouping variables are usually discrete (there are exactly 2 levels:  for example, yes or no).  You can use a variable with more than 2 levels as long as you specify how to divide the variable into 2 groups.

How to understand the output:  You must determine if the 2 groups have equal or unequal variances.  Levene’s test examines the variances to determine heteroschedasticity ( the variances between the 2 groups differ significantly).  Heteroschedasticity may occur for several reasons:  there may be a large difference in the n of each group; there may be structural reasons that cause differing variance,  For example,  income and food expenditures exhibit heteroschedistic tendencies.  As income increases, food expenditure variance also increases.  Typically poor people have a relatively consistent amount spent on food (typically buying inexpensive foods such as fast food.  As income increases, the variance of food expenditures also increases.  The wealthy may choose to occasionally eat fast food as well as consume expensive gourmet meals.  When you examine your output, you will note a Levene’s F value and level of significance.  Normally, if the significance (p) is equal to or less than .05, you must use the unequal variance t-test. If p is greater than .05, you may rely upon the slightly more powerful equal-variance test.

Look at the Levene’s significance (p) in our output. Since it is .191, we can assume that the variables ‘TVhours’ and ‘sex’ have similar variances. Thus we will use the first line of the output (“equal variances assumed”). If the value was .05 or less, you would examine the second line (“equal variances not assumed”).

Paired-samples t-test:    This test compares one group with two variables (for example, a sample group who takes a pre-test and a post-test). The GSS database that we are using does not have variables that are appropriate for this test. Let’s assume that you have a class of 20 students who are learning about SPSS knowledge. They are given a test prior to going through this SPSS eTutor (the pre-test) and again when they have completed their review of this open educational resource (the post-test). Here are their scores: 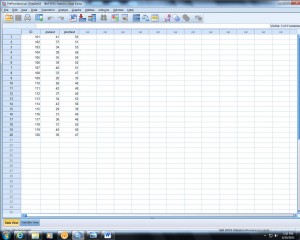 Did their review of the SPSS eTutor make a difference?To find out, click Analyze, compare means, paired samples t-test. Highlight your variables and move them into the Paired Variables box. 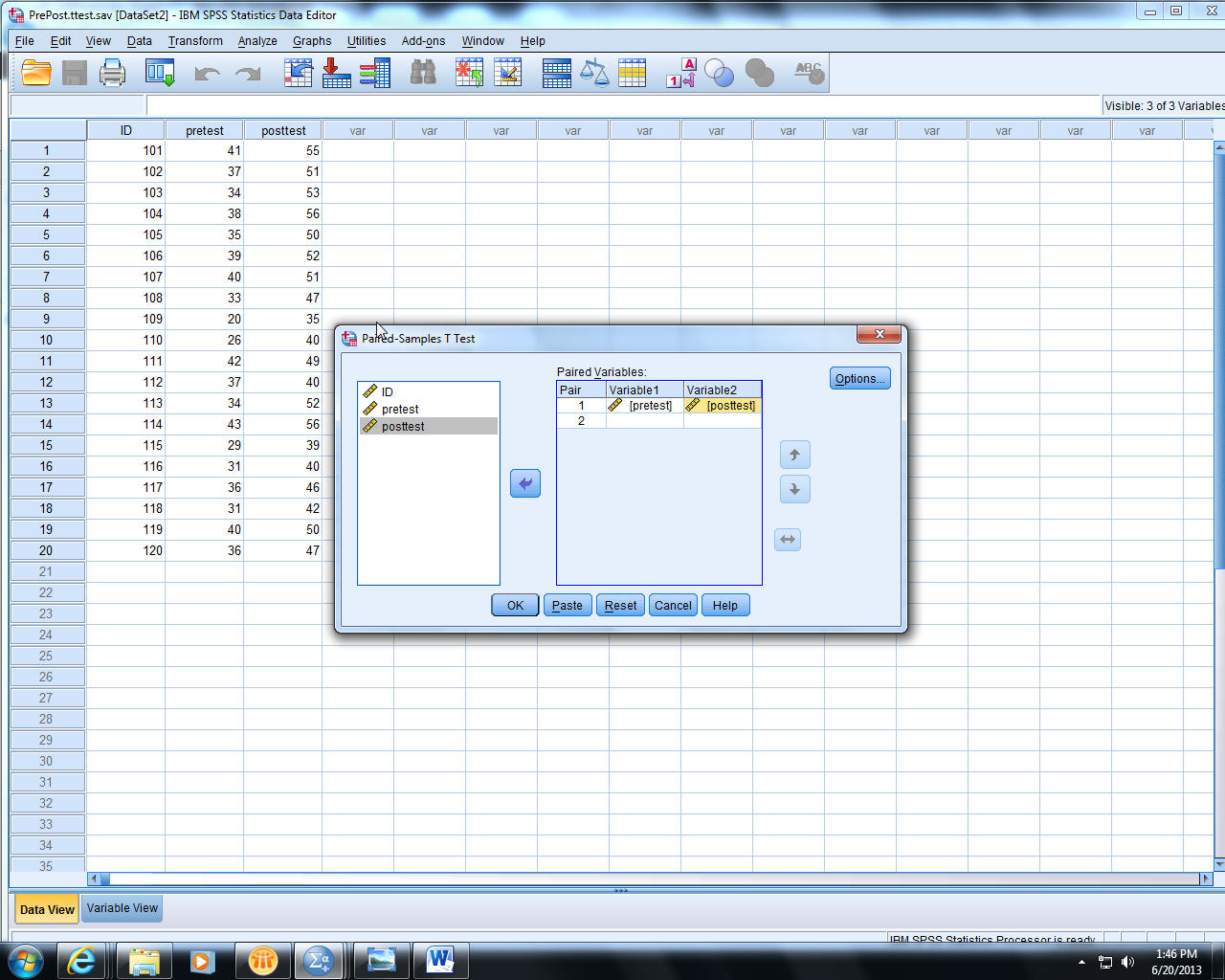 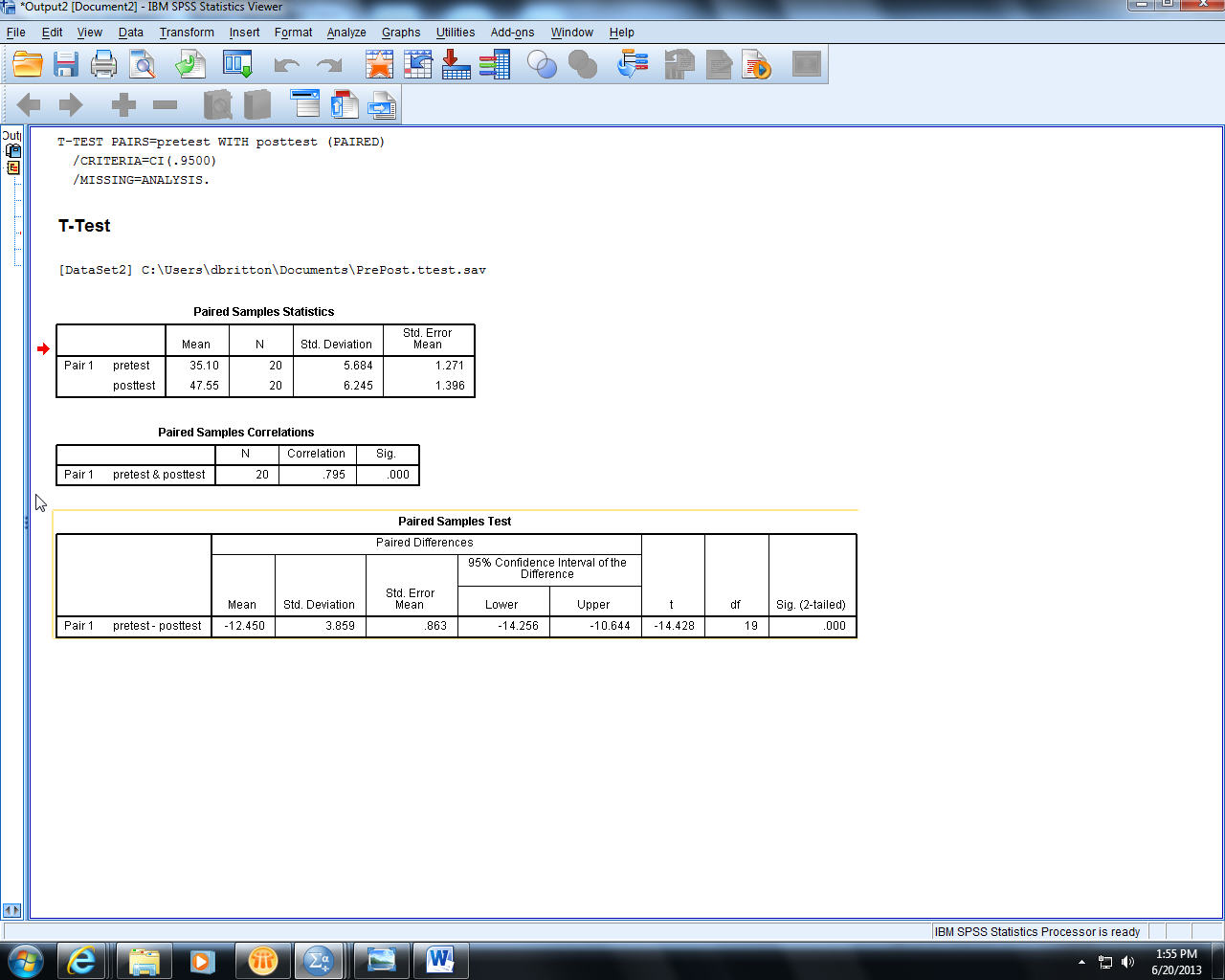 First, you need to determine if there is overall significance. Go to the column Sig. (2-tailed). If this value is less than .05, you can conclude that there is a significant difference between the scores. Since our value is .000 (less than .05), we are able to conclude that there is a signficant difference in the pre-test and post-test scores. Now, compare the two mean scores. The pre-test mean = 35.10 and the post-test mean = 47.55. Therefore, we know that the SPSS eTutor improved students test scores! Be careful that you do not automatically assume that the SPSS eTutor caused the increase in scores (although I would like to believe that is the case). You need to make sure that there are not other confounding factors that would have contributed to the increases in scores.

Please note: If you need to request accommodations with content linked to on this guide or with your SPSS Software,  on the basis of a disability, please contact Accessibility Resources and Services by emailing them at Disability.Services@esc.edu.  Requests for accommodations should be submitted as early as possible to allow for sufficient planning. If you have questions, please visit the disability services website https://www.esc.edu/accessibility/